27. Travel in a Foreign county with a friend.

I spent a week at the beginning of this month my first time abroad, in Dubai.  I would have posted more while we were there, but I decided it was a vacation from everything, including blogging.
My boyfriend (Who I will refer to as “IT” at his request) is working out of the country right now, and has been for the last couple of months, so we decided to take a vacation in Dubai.  After a hassle trying to get my passport, and a long first flight by myself, I arrived.  Then proceeded to sit in the airport for three hours until IT got there and we found each other.

June 30th
My first time flying alone, and I go across the ocean.  I don’t sleep on planes, sleeping while in transit makes me motion sick, and one a plane ride of 12+ hours would be extra miserable if sick.  Instead I watched the following movies:
Sinister 2 – Which I’d seen most of before, and this version was “edited for content”.  There was only one major scene that I noticed was missing, but a few other things in the movie made more sense with it in.
The Boy – I enjoyed the twist ending!
The Otherside of the Door – most of it.  The dog died and I turned it off.
Everest – I joked afterwards that the scariest movie I watched on that flight was Everest, being a aspiring climber of the mountain, and a rock climber, I know a bit about it.  I knew about the event, too, but couldn’t remember who survived, which made the movie that much more stressful.

Also during the flight we were told that we were hitting some turbulence, my first thought was of the second Sharknado movie… 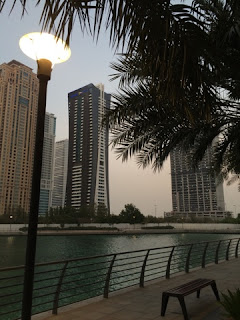 Because we were both pretty tired, and hadn’t seen each other in over three months, the first few days we spend mostly sleeping, watching animal planet, and just wandering around the stores and water near our hotel.
My first impression was that everyone was very friendly, there were a lot of people who would talk to me, and ask me questions – mostly things like “where are you coming from?!”  Others would just smile and/or wave.  I mean, I did stand out quite a bit, plus I was wearing jeans, a flannel and a beanie.
The whole city was fairly relaxed and welcoming, as long as you were respectful.  It was Ramadan for the first five days of the trip, which meant during the day everywhere selling food was either closed, or at least had curtains closed so you couldn’t see inside, and here were signs in the grocery stores asking people to refrain from eating in public places.

A lot of people were really nervous about me going because it’s a Middle Eastern country.  I can tell you I felt just as safe there as I do in my home town.  One of the biggest questions I was asked was “will you have to cover yourself and everything? and “are you sure it’s safe there?”.  While they are a muslim country Dubai is also tourist-centric city, so they rely on tourism heavily, which means they would never get away with having a dress code that strict.  Even the dress code I’d read about online – and was very nervous about breaking – wasn’t really enforced, and there were a lot of people in clothes I’d read would be deemed inappropriate.  And again, I felt just as safe there as I do at home, because they are a tourist city and if it was as dangerous as people I’ve talked to seem to think it is then no one would visit! So if that’s a concern of yours, and a reason you don’t want to visit you have nothing to worry about.
July 4th 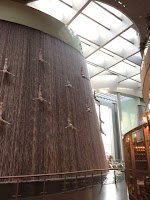 We visited the Dubai Mall, one of the largest malls in the world.  It was really cool, we didn’t actually buy anything, or go into many stores, but just walking around was exciting.  They had some cool art around, a lot of people from all over the world, weird but awesome stuff like a full dinosaur skeleton, and my personal favorite, the Dubai Aquarium.

The food court situation was actually pretty interesting.  They didn’t shut down the food court during Ramadan, but so as not to be disrespectful towards those that were fasting they had it blocked off.  I’d never thought about that as a possibility, I honestly expected anywhere that served food to be closed completely during the day. 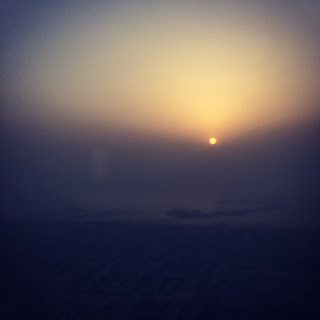 The bigger thing we did was go to the observation of the Burj Khalifa, AKA the world’s tallest building.  Looking down at the city, and watching the sunset from 1,821′ up in the air was pretty incredible. Unfortunately, I forgot my nice camera this day, and was left with only my iPhone to take pictures with.

We did laugh at the plush version of the Burj that they gave each of us.

July 5th
This was the day of our aquarium visit, so obviously I made sure I had my nice camera on this day so I could take tons of pictures of fish, and other aquatic creatures.
We signed up for one of their special experiences, so after wandering through and looking at all the animals for well over an hour and a half, we got to hand feed rays! I was really excited, and I’m actually half tempted to cross number 76 (Swim with stingrays) off my list, because we were actually standing in the water with them, even if we didn’t technically swim.  Much to my parents’ dismay, no pictures were taken of us feeding the rays.  There was a pretty decent sized Nurse Shark swam up to us trying to get us to feed it, but our “guide” scared him away.  The big leopard whipray wanted some treats really badly, too, however he also wasn’t allowed to have any.
Some quick Dubai Aquarium fun facts:
July 6th 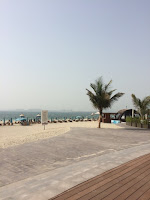 We got to explore a little more, and walked from our hotel to the beach.  Despite the heat it was a nice walk.

Because it was so hot during the day we opted to go back to the hotel, and then visited the beach after dark.  It was really cool at night, there were a lot more people there, and the water was so nice and warm.  The water was significantly nicer temperature, in my opinion, than my home near the beach in Maine is. 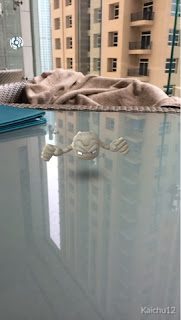 For our last day of vacation we spent a lot of time in the pool in our hotel, and playing the new most popular mobile game – Pokemon Go.

I wouldn’t have started playing the game while on vacation abroad, except IT and I wanted to play it together.  So we did join the trend and went on a walk just to catch new Pokemon.

July 8th
Unfortunately every vacation has to come to an end, and IT’s plane was over three hours before mine.  So I got to wander around my terminal in Dubai for a couple hours.  I try to collect postcards, and snow globes because they’re usually fairly inexpensive, and easy to find.

After doing a few laps around the airport out of boredom I bought a donut and sat to wait for my plane.

The plane ride back would have been much longer, there’s only so many movie franchises I can watch in a row, but we got to stop in Milan for about an hour.  Italy is somewhere I’ve wanted to visit for a while, I’m even learning and teaching Cheyenne commands in Italian, so it was pretty cool that I got to stop there of all places on my way home.

The rest of the trip was very uneventful, other than my confusion about going through customs in the USA (it was ridiculously easy) because it was different than when we landed in Dubai, and a three hour layover in JFK where I played a lot of Geometry Dash and Piano Tiles while trying really hard not to fall asleep.

Firsts:
Other than being the first time I’ve left the USA there were quite a few other “firsts” for me on this trip.